Throughout my life I have been so blessed in having met so many incredible human beings, people that have been willing to open their hearts and their stories to me, people that I believe undoubtedly were placed in my life for a reason. This is one of those families. I talk some about how we connected when I blogged their maternity session a few months ago, but from the time that Mandy moved to Las Vegas and began looking for a newborn photographer there are just so many cool coincidences.

I was so surprised when Brandon was the first to approach me about documenting their birth. I usually have to convince dads that it will be beautiful and they will be so glad they documented this time in their lives.

Our original plan was for a maternity session and in-home newborn session, once Rex arrived. After we worked together for their maternity session, they began considering a Fresh 48 and after I had posted a couple of birth images Brandon messaged me and inquired about birth. I was so over the top excited.

One of the reasons I am so passionate about documenting births is that each is so unique and different. It truly is like no other time in our lives. It is intimate, life changing, so full of story, and connection, and so many firsts. After 19 years as a labor nurse I can truly attest to that.

Because of the complications from their previous pregnancy and subsequent loss of a child this pregnancy was high risk from the beginning. Their journey to become pregnant with Rex was a long, tough, and emotional one, for this reason their induction was scheduled in advance. To say that there was intense fear and anticipation in the waiting is an understatement.

Their induction was a long one, spanning two days. I was sure to come in and capture some of those first moments and then made my way in and out of their room over the next two days to give them their space, and still capture some of the mood and story as it unfolded.

This is the second birth I documented at Southern Hills Hospital, and they have the most beautiful windows allowing so much beautiful natural and interesting light to flood the rooms. Light makes my heart sing every single time so I was in heaven. 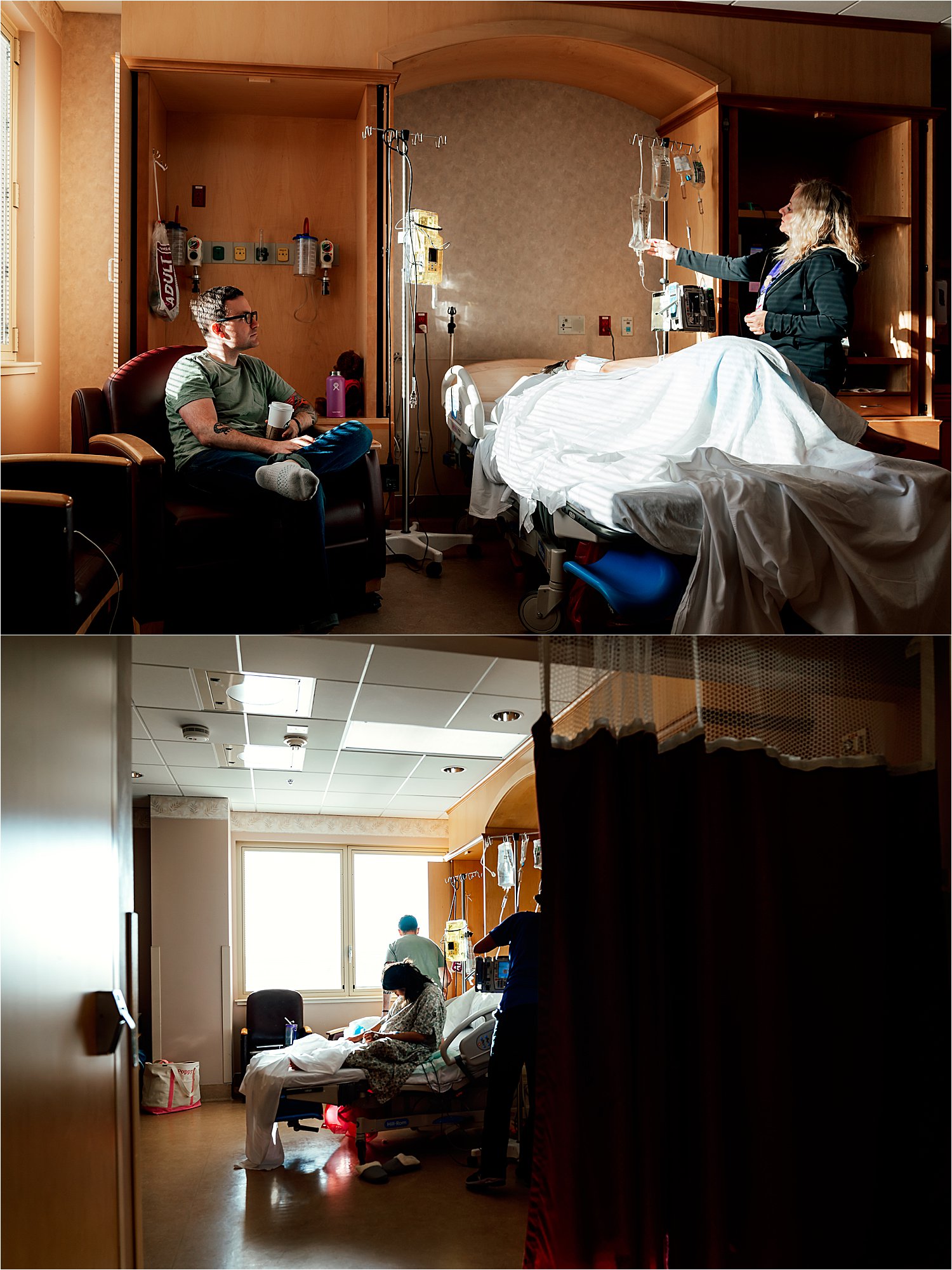 I try and be as unobtrusive and as much of a quiet observer as possible in your birth space, I want to really document how it feels in that moment, and to do that well I have to be able to really blend in and quietly observe.

Dr. Paul Wilkes is truly an incredible soul and amazing human being. He is as genuine as they come, and I have had the pleasure of working for him, alongside him, and now documenting him in action.

They had developed such a special relationship and having him present speaking words of encouragement, hope, and faith in them both was beautiful to watch.

Brandon was so awesome to watch as he bent over and whispered words to his son.

Rex was so alert and interested in everything going on around him. This guys is going to be a deep thinker for sure!

For my April through August families I offered a complimentary Fresh 48 session. Fresh 48 sessions are such a great way to introduce siblings and come back after everyone is a little rested and settled.

I couldn’t wait to come back and document Poppy meeting her baby brother.

While we waited for dad, big sister, and grandma to arrive we captured some really beautiful and tender moments of just mama and her new baby.

Be sure to watch their birth story film to really capture just how sweet and tender Poppy meeting her baby brother was. I literally cried every time I worked on their film.