August has been my busiest birth month to date. I took on more birth clients this month than I ever had in the past because each one was so unique and special ( I still have one more to go at this point).

I limit the number of births I take a month to ensure that I am available when you go into labor, no matter what time of day it is. I don’t book much of anything else while on call for birth for the same reason.

Sarah Beth is local photographer and dear friend. She is an extremely talented newborn and birth photographer (in fact we are each other’s birth back ups!), you need to check out her work! Sarah Beth Chamberlain Photography.

I was so honored when she reached out to me early in her pregnancy to book me! She knew early on what type of birth she wanted and where she wanted to deliver, and worked hard to make it all come true. They are a military family and had delivered in two different states with their two older children and in two different types of facilities with two entirely different experiences. Their oldest son was born in a hospital setting, and their second child in a birth center. She found her second birth more in line with her wishes and really felt that if things were progressing normally in her pregnancy, and if she was not high risk, than a home birth is what she really longed for. We spent time talking about her hopes and dreams for this birth and she had decorated her birth space just as she wanted.

She had gone early with her previous two deliveries and had experienced preterm contractions off and on for months leading up to her birth. She really just wanted to make it to the 37 week mark to feel confident delivering at home. She went right at the 37 week mark! Sarah had an appointment with her midwife April Clyde of Serenity Birth Center on the the day she went into labor and things were looking great, but she just really had the intuition that it was going to happen soon. Her adorable son was especially eager to meet his baby brother and told the midwife that it was going to happen that night.

There is no better way to share their birth story than in Sarah Beth’s own words!

All day on Tuesday, Everett aired his wishes for his little brother to be born. A number of times, including at our 37-week prenatal appointment that morning, he brought up the fact that it was a full moon and a lunar eclipse. He’d heard that lots of mommas go into labor under a full moon, and he was eager to get the party started.

That night we did our usual evening stretches, walk, and spinning babies exercises to try and encourage Waylon to turn out of his posterior position. At around 9:30PM I started having frequent but light contractions. After having rounds of prodromal labor since week 32 of this pregnancy, and that being the norm for all of my pregnancies, I didn’t really put too much hope into this being the start of labor. However, I phoned the midwives and our birth photographer anyway just to give them a heads up. Josh and I went to bed. Either way, we needed rest.

At 1:50AM Evangeline came into our room. It had been months since she woke up in the middle of the night, but here she was at my bedside wanting some cuddles. I told her to wait just a moment so I could go potty, and then we could snuggle. After emptying my bladder, it became pretty obvious that my water had broken. I woke Josh and returned to the bathroom. By the time he rose and came to check on me a few minutes later, I needed a whole stack of towels for clean up. Somehow, I think Evangeline awoke because she sensed something stirring. I probably would have slept another hour at least.

After calling our birth team to let them know things were happening, contractions began to pick up pretty rapidly. Evangeline was eager to wake up Everett, but we managed to keep her from doing so for about an hour. I had woken up quite hungry from the contractions doing work while I slept, so Josh brought me snacks. Strawberries, blueberries, and corn chips. I’d regret the corn chips later, but I needed the energy. I sat on the birth ball, leaned on the wall with Josh applying back pressure, and couldn’t make up my mind as to whether the tub or the toilet felt like a better place to hang out. Sarah, one of our midwives, arrived and checked for dilation. I was just at 3cm, so we had some work to do. I tried to stay out of the tub as much as I could, although it offered some relief to those powerful contractions that come after the cushion of a bag of waters has been emptied. I walked the hallway, rocked some more, and did whatever I needed to do to tell my body to get things moving. Sure enough, gravity and good labor positions eventfully led to some signs of transition. We sent for Sarah and April. 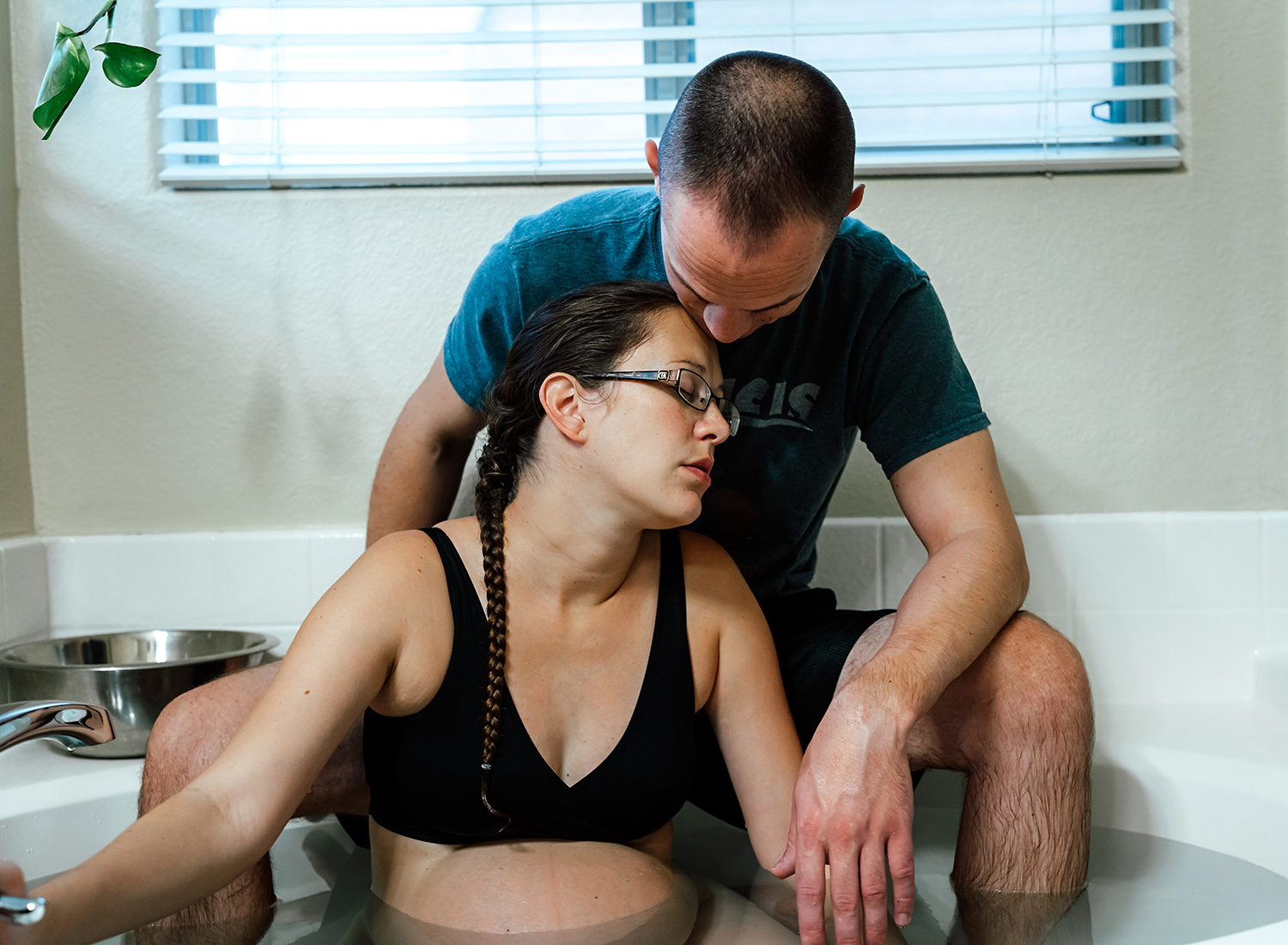 This stage felt nothing like either of our first two babies, because this baby was not quite in the same position. He’d been posterior for weeks, and although he’d started to turn, it felt like he wasn’t nestled in quite the same. Nevertheless, I felt hot and nauseous, and I knew this meant that the tide was shifting toward delivery. I got in the tub and had Josh apply back pressure. A few contractions in, the nausea took over and up came those tortilla chips. With that heave however, I felt Waylon shove firmly down into my pelvis. That was the nudge we needed. Josh continued to squeeze into my back while I labored in the tub, waiting for the urge to push. Sarah wafted peppermint at me to ease the nausea. I was exhausted, and dozing off for a second or two between contractions. It seemed like it took so long, and when I felt that first pushing wave begin I cried out “yes”. I was so ready get this done and hold my baby.

With each wave of pushing contractions, I tried to squeeze in two to three pushes. Josh squeezed hard on my back to offer relief. After the first three waves, I was thinking okay where’s my baby. Two to three pushes was all it took for big brother and sister. Waylon seemed so much harder to squeeze through, and he was descending slower. I needed to feel progress, so I reached down after each surge to feel for him, measuring his position in knuckles. At one point we made backwards progress, but it only made me fight harder. With the next wave I began to roar with each push. I heard Josh chuckle from behind me. This “beast mode” was new to him too, and amusing. I had to admit to myself it kind of was. Finally, Waylon was crowning. I reached down to feel his little head and was surprised to feel fingers. He had surfaced with a forward presenting arm. As I played with his fingers, waiting for one final wave of pushes, he grasped my finger. Sarah unwrapped his cord from around his neck. One final push, and he was out. I brought him up to my chest and snuggled him up. He had a perfectly round little face and was completely peaceful. As we rubbed his little back and stimulated him to get him to use his lungs, he finally let out a little cry. I could see he had a complete tongue tie like his brother. We also discovered that he had a knot in his cord, which was neat to see.

After some snuggles in the tub, Everett cut the cord and we got out to warm up in our cozy bed. Waylon had his newborn exam, weighing in at 7lbs 12 ounces and 21 inches. He had his tongue tie clipped and when he was brought back to me, he latched right away. Such a relief to have him nursing easily. He’s been a pretty awesome feeder since. Everyone in the family is just smitten with him.

This really was the most tender home birth I have seen, Sarah Beth was surrounded by and loved on by her family her whole entire labor. You could just feel the anticipation and excitement from big brother and sister, and their awe of the whole process.

As soon as I documented those first tender moments with their baby and the newborn exam, I stepped out to give mama her much needed time with her baby. I generally stay 1-2 hours post delivery to capture those first moments and skin to skin.

I did come back the next day for a Fresh 48, which is always so fun because I get to continue to document those first days with your baby. There really is nothing like it, everything is so fresh and new and just soaking in what you have done and just how much you love this little human that you have created and finally get to hold in your arms. It truly is life’s greatest love story, in my opinion.

A Place of Love | A Surrogate Birth Story »